Once Christmas in America meant chopping down a tree, caroling door-to-door and baking holiday cookies with Mom. But at this time of year boomers like me feel the same kind of holiday nostalgia for unpacking a fake, boxed tree while watching “A Charlie Brown Christmas,” and nibbling on packaged holiday cookies, specifically, in my case, anise-flavored Noel sugar cookies from the Massachusetts-based Educator company. 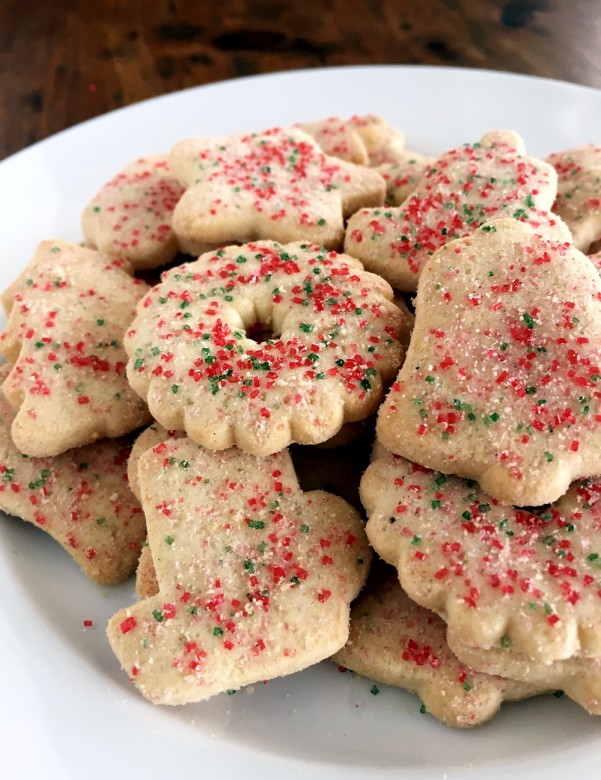 These crisp, red-and-green-sugar-sprinkled bells, stockings and trees were not just my family’s favorite dessert in the weeks leading up to Christmas – they were also Santa’s favorite – at least that’s what my two brothers and I surmised from how Santa polished off the plate of Noels and glass of milk we left in the living room for him every Christmas Eve.

Our love for Noel cookies did not stop when we found out who was really eating them – but continued through our teens and into our young adulthoods, when we discovered that Noels tasted even better with coffee than with milk.

“Do you have the cookies?” was always one of the first things my brother Vern and I asked after our drive to our hometown of Cumberland, R.I., from some or other Noel cookie-less wasteland where we landed our first jobs — the anise cookies being a guaranteed sweetener when conversation soured between the generations.

A box of the cookies was also a standard part of the gift box my mother sent my other brother, Doug, in Los Angeles. Over the years, the design of the box morphed from its original expensive green foil to plain green, and later, to decorated white cardboard; and the name of the cookies changed from Educator Noel to Burry Jingles. This created more than one Noel cookie scare before my Mom, with the help of one or another friendly supermarket manager, picked up the anise scent again.

Until Christmas 1997, when my Mom greeted me at the door waving a box of Jingles cookies made by Keebler. “They look like Jingles cookies but there’s no anise flavor,” she said with disappointment. “They’re imposters.”

Real Noel/Jingles cookies were nowhere to be found that Christmas, or the next, or the one after that. For the first time, I could understand the appeal of those corny holiday Currier and Ives and Norman Rockwell paintings for older Americans whose own icons of Christmas were similarly long gone.

We want to share our spring Yankee with YOU!

Take a break and read about all of your favorite locations that made the Best of New England Hall of Fame.

How could we have been so stupid as to entrust our most cherished holiday tradition to a profit-driven corporation?, I wondered aloud over more than one of our Noel-less family holiday feasts.

Fast-forward to late November 2010 when, on a kick to give “meaningful” presents (i.e. light on cash), I literally decided to take matters into my own hands by baking a batch of homemade anise-flavored sugar cookies and set out on the web in search of a recipe.

Googling “recipe Jingles anise cookies” yielded not the hoped-for recipe but the Noel/Jingle cookie motherlode: a blog entry by Chicago ex-pat “Poofygoo” (Poofygoo?)  lamenting her inability to find this cookie in her new D.C. home. This was followed by more than 50 responses posted over a span of five years, echoing Poofygoo’s Jingles’ love and longing, and offering hope in the form of Jingle cookie sightings.

“I just called the local Dominick’s and they say … they have the Jingles,” said Katie, after another Chicago resident reported buying some from that supermarket chain. “We’re out the door …”

Not only was my family not alone in our feelings about this cookie, we were not as pathetically bereft as the anonymous poster who confessed to pouring anise oil over some  of Keebler’s faux Jingles cookies and sealing them up in a container in hopes they would soak up the crucial missing flavor.

Like most of the other commenters, this woman was from Greater Chicago. Educator and Burry were apparently not the only regional cookie companies to make and sell what Chicago-area cookie expert Connie Meisinger characterizes as “an Americanized version of popular European anise cookies like the Swedish springerle and the Italian pizzelle.” So did Salerno in Chicago, upstate New York and some other parts of the Midwest — although during their brief period owning Salerno in the 1990s, Keebler snagged the rights to the Jingles name for their plain-sugar imposter. This caused Salerno to rename their anise-flavored cookie “Santa’s Favorites,” according to one poster who claimed insider information. 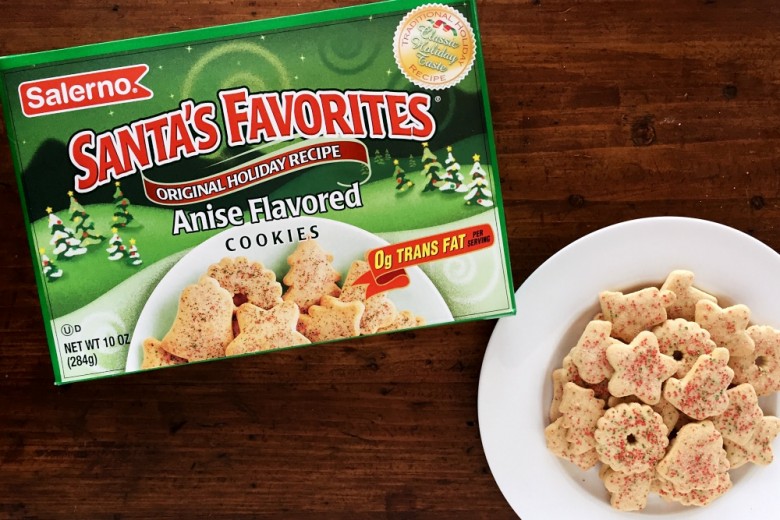 Alas, the Poofygoo denizens reported no Santa’s Favorites sightings in New England or my current home state of Pennsylvania. But they did give me a place to start. A computer search on the Maurice Lenell company, briefly mentioned on the forum, yielded not just a reference to its Jingles-like holiday anise sugar cookie but to a Lenell company mail order store. But, I found out on one emotional roller-coaster of a day, that they were already sold out of their anise cookies for the season.

The Poofygoo posts make it easy to believe that the U.S. Postal Service is being single-handedly kept alive by the care packages of Santa’s Favorites that are daily criss-crossing the country to meet Chicago ex-pats’ Jingle cookie cravings, I, alas, have no friends and relatives living in Jingleland, and had no success bribing any of dozens of employees of Midwestern supermarkets sited on Poofygoo into mailing me some.

And while Salerno’s current owner, Snyder’s-Lance, has many nationally distributed food products, Lance has “no plans to expand the (geographic) footprint previously in place for Santa’s Favorites,” company spokeswoman Heather Woolford told me.

I called Woolford to find out where Jingles  cookies were now sold but also in the secret hope that she might offer to send a Jingles-hungry journalist some boxes. No such luck with that or with my concluding plea that former Noel cookie eaters in New England represented a huge missed sales opportunity for her company.

Down to crumbs ideawise, and facing the unpleasant prospect of having to go with my original plan and drag out the baking pans, I decided to take a flyer on the online destination of desperation —  eBay. I typed “Santa’s Favorites” — and what to my wondering eyes did appear but a “Buy-It-Now” listing for a case of Salerno Santa’s Favorites Anise Flavored Christmas Cookies. It was offered by Buffalo-area snack food distributor Jason Sardina, who exploits Jingles love by selling cases of the cookies online in a thiving holiday side-business. (Wise up, slacker Midwestern supermarket employees!) 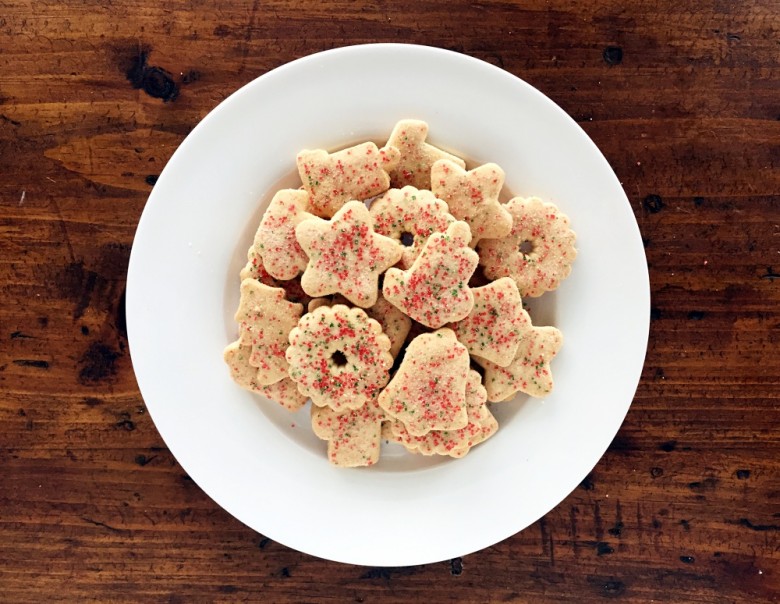 A festive plate of “formerly known as Jingles cookies.”

His savvy description, noting that the anise cookies, “formerly known as Jingles cookies,” are “only available in select areas and are a must for the holidays,” snagged him orders from more than 50 Jingle lovers all over the country last year, including me.

Two weeks and one hefty Paypal payment later, I was eating my first commercial anise sugar cookie in almost two decades. It was smaller and the holiday shapes, no longer embossed, but, in the most important way, taste, they are exactly the same.

“A Christmas memory” is the way my L.A. brother put it on the phone on Christmas Day after opening one of the four boxes I’d sent.

“The ghost of Christmas past, present and future, all in one,” I responded, thinking of the trailer-load of Santa’s Favorites boxes in my freezer that promise to keep the Wymans’ Noel cookie memories alive for a very long time.

2017 UPDATE: Craving Salerno Butter Cookies or their anise sugar Christmas cookie counterpart? The Salerno Santa’s Favorites Anise Christmas cookies Carolyn found on Ebay can now be found on the shelves in a few other easy-to-reach places during the holidays, including many Target stores. Happy munching!

Carolyn Wyman (www.carolynwyman.com) writes about new supermarket foods in the nationally syndicated Supermarket Sampler column and is the author of multiple packaged food tomes (including “Spam: A Biography,” “Jell-O: A Biography” and “Better Than Homemade: Amazing Foods That Changed the Way We Eat”).

This post was first published in 2011 and has been updated.